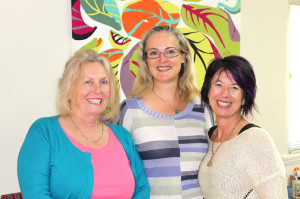 At Lane Cove Podiatry, we have a team of stars that are here to make sure your feet are pain free and functioning the best they can. Not only do we have our team of podiatrists, we also have onboard a Podiatric Surgeon.

Stephanie joined Lane Cove Podiatry in 2012 and is now Principal Podiatrist, after running a successful practice in Umina on the Central Coast for 20 years. Stephanie specialises in General and Sports Podiatry and Nail Surgery.

Many of our patients are families and we see children of all ages including toddlers. Stephanie sees many children of school age for lower limb injuries and pain.

Education is important to Stephanie who has been involved in mentoring students from UWS, Newcastle and Charles Sturt University for several years. Stephanie loves public speaking and sharing the foot health education message with community groups. She is a valued speaker at Probus and Rotary Functions.

Being a keen competitive rower and skier, Stephanie enjoys all aspects of sport. She has a strong interest in sports podiatry and the prevention of sporting injuries as well as the challenges of general podiatry care and choosing the right footwear for all your needs.

Stephanie resides in Riverview where she lives with her family. Being close to work is a bonus and Stephanie is looking forward to being proactive in the local community.

Susie has been a member of the Lane Cove Podiatry team since 2007. Susie and Lisa attended high school together at Abbotsleigh and then trained together at Sydney Technical College. Susie brings a wealth of experience to the practice with special interests in general podiatry care and care of the diabetic foot.

Susie has three children so she understands the challenges of juggling family and career. With interests in tennis, skiing, design and fashion we are fortunate to have a podiatrist with such experience, insight and professionalism on our team!

Ozan Amir obtained his undergraduate podiatric degree from the Queensland University of Technology in 1994 and completed his Master of Podiatry from Curtin University in 2004. He has worked in private practice for 18 years in both Canberra and Sydney.

He obtained his surgical training with the Australiasian College of Podiatric Surgeons, with additional clinical and surgical training based in the United Kingdom and the United States. Ozan completed his United Kingdom preceptorship within the Orthopaedic department of the Great Western Hospital, Swindon, where he focused on forefoot and diabetic high risk foot surgery.

He also completed 3 months surgical training at the prestigious Podiatry Institute, Atlanta, Georgia. During this time, Ozan broadened his experience in rearfoot reconstructive surgery. Ozan is a sessional lecturer at the Central Queensland University, School of Podiatry, and has been active within the NSW Podiatry community, being part of many workshops, continuing education lectures, and conference presentations.

He has an interest in bunion surgery and complex reconstruction of the forefoot, including severe hammertoe deformities. Ozan is experienced in minimally invasive foot & ankle procedures.

Lisa is currently on extended leave travelling Australia or at least parts of it that are accessible!

Lisa has been working as a qualified podiatrist ever since graduating in 1984 and commenced working at Lane Cove Podiatry as an Associate and then Principal Podiatrist from 1987 until 2014. Since that time Lisa has focused on developing a practice that is directed towards family podiatry care and building a team of professionals in the practice that can deliver to you innovative and customised treatment, listening to you and giving you options to address your needs.

Lisa has always showed an interest in sports podiatry and injury management that has strongly influenced the practice, making it the primary focus.

Lisa has continued to develop her professional skills. She shares her knowledge with podiatry groups and students by speaking on trigger point techniques and joint mobilisation.

We are so fortunate to have a team of wonderful support staff who look after our front desk, who organise your appointments and attend to the sterilisation area. Our support staff are the IT wizzes of the practice keeping the podiatrists in line, organised and maintaining open communication through our regular newsletter, emails and blogs.

Cate Gardiner has been a part of our practice for several years. Her background is in the health and wellness industries.

Many runners, athletes and skiers can experience damage to their toes and the toe nails.  When t[...]

Why do feet smell so much particularly when they are on the bottom of an adolescents leg? [...]

Trips and Falls - how to prevent a fall.

Falls are a common and major cause of injury in the elderly. It is the main reason for injury-[...]